There are many songs that you can learn on the ukulele to impress your friends and family but one of the best and most practical songs would be the “Happy Birthday” song. Fortunately, it is a simple song to learn on any instrument and can be played on the ukulele using three of the most basic chords.

Happy Birthday Chords on the Ukulele

The chords for happy birthday are C, G7, and F. These are known to be three of the first chords you learn on the ukulele so playing this song can be done with a beginner to the instrument. If you are more comfortable with playing the G chord instead of the G7 chord, it can easily be replaced.

The three chords are as follows: Here is a video clip of happy birthday on the ukulele by yours truly if you would like to see the length of each chord since the timing of the second chord can be tricky at first.

The happy birthday song can be played in just about any different key. Most basic songs on the ukulele are played in the key of C, which makes it a perfect key for the song (which is commonly played a half-step up in the key of D flat on the guitar with a capo on the first fret).

If you decide to play the song in a different key, it follows the same structure. The “happy birthday” progression uses the I, IV, and V chords. To find the chords in reference to the key, the chords can be found when counting the degrees on a major scale.

For example, if you wanted to play in the key of C, you would first write down all the notes on a major scale.

The I chord is C and if you count forward, you will find that the IV chord is F and the V chord is G.

This way, if you decide that you sing better in a different key, you can easily switch to a different key to play the same song. With the “happy birthday” song in an I, IV, V progression, it is the perfect song to play around with different keys (and is great for practicing common chords in different keys). 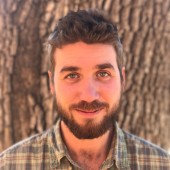